Round-up for Saturday 13th of October 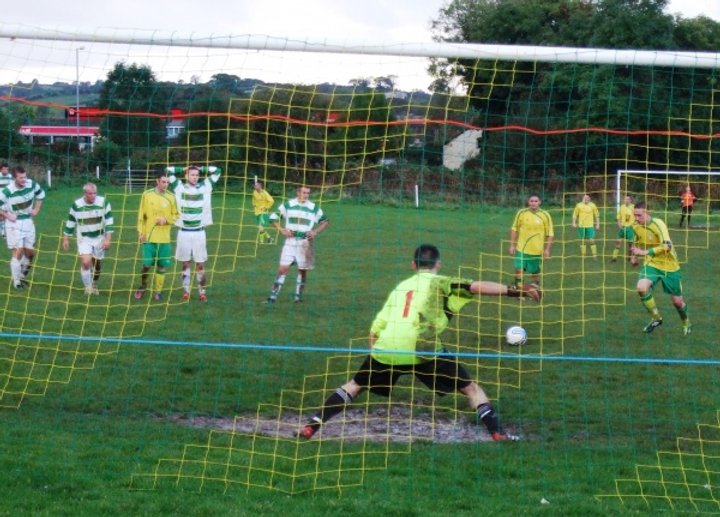 The KonX Wales Anglesey football league took a back seat as the second round of the NWCFA Junior Cup got under way – weather permitting, and the Island teams shared mixed results with four teams joining Menai Bridge Tigers –winners last week, in round three, Five falling by the wayside and two involved in postponements have to play next week
The holders, Morawelon are through in a high scoring clash with Llandwrnog that needed extra-time with the scores at 5-5 the holders eventually ran out winners by 8-6. Leading the way was Gary Jo Owen with four, and dale Murphy and Barry Haigh both hit doubles, for the visitors, Gareth john and Luke Appleby . Both hit doubles and David Davies and Craig Jones the others.
Pentraeth, who have been scoring goals for fun over the last four weeks, played host to last season’s runners- Talysarn Celts and found the going tough. Jack Jones had the Celts ahead on fifteen minutes as they outplayed their hosts and stopped them getting any service to their front men. With half-time well overdue, Pentraeth were awarded a penalty – hotly disputed by the Celts and Tom Taylor blasted it straight down the middle 1-1 Taylor then made it 2-1 seven minutes after, Talysarn rattled the cross-bar but couldn’t pull it ,back.
Llanfairpwll Res., trailed by two goals at Llanrwst, Cai Moore [2] and Phil Snape [20] with home striker Sion Thomas outstanding , before pulling it back to 2-2 , Joe Pritchard o.g. [55] and a Ricky Roberts penalty [62] and take the tie into extra-time where they completed the turn around to win 6-3 with goals from Caerwyn Roberts [92] Sion Williams [97] Tom Verburg [106]] and Joe Vousden [112]
The all Anglesey tie at Llangoed & District with Amlwch town Res the visitors, ended 2-1 to the hosts. Wayne Thomas and Tom Parry opening a two goal lead before Sion Griffiths pegged one back.
Both Bodorgan and Newborough fell to last minute winners in 5-4 score lines, away at Y Glannau and Machno respectively . On the mark for Bodorgan were, Ryan Hughes [2] Mark Williams and Nathan Jones, and for Newborough Dafydd Harries, Rob Hughes [2] and Nathan Moore Llandegfan Antelope also returned home having tasted defeat by 4-2 at Cerrigudrigion, after Jack Higgins and Luke Bedson had pulled it back to 2-2 for the Islanders.
Trearddur Bay Res., looked to be well on their way to round three leading by a Ryan Lees strike but a Steve Hughes equalizer [50] was followed by two more goals in the last four minutes, by Hughes again and Dylan Peters

PICTURE:
As the Celts keeper starts to dive to his right, Tom Taylor blasts it straight down the middle to make it 1-1 on the stroke of half-time

 TOM TAYLOR'S TWO TURNS TIE AS PENTRAETH RECOVER FROM ONE DOWN